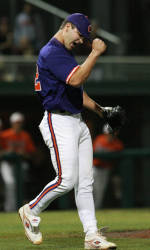 The #18 Clemson Tigers scored three runs in the 11th inning and held on for an 8-7 victory over #24 Florida State in front of 5,790 fans at Dick Howser Stadium on Saturday night. The Tigers, who evened the series 1-1, improved to 14-5 overall and 5-3 in the ACC. Clemson also upped its record to 3-1 in extra-inning games. The Seminoles dropped to 10-8 overall and 2-4 in ACC play.

After the Seminoles tied the score in the eighth inning on Tyler Holt’s two-run homer, both teams had a runner on third base with one out in the 10th inning. But both teams were unable to score the go-ahead run. Then in the top of the 11th inning, Ben Paulsen’s sacrifice fly and a two-run homer by Kyle Parker put Clemson ahead 8-5. The Seminoles rallied for two runs in the bottom of the 11th inning and had runners at second and third with two outs. But the Tigers recorded the final out on a groundout to seal the one-run victory.

Reliever Matt Vaughn (1-0) earned the win. Vaughn pitched 2.0 innings and allowed two runs with two strikeouts. Casey Harman, who will start on the mound in the series-finale on Sunday, recorded the final out to pick up his first career save. Seminole reliever John Gast (1-2) suffered the loss, as he gave up two runs in 0.2 innings pitched.

The Tigers took the game’s first lead in the second inning without the benefit of a hit. Parker was hit-by-pitch to lead off the inning and Jeff Schaus followed with a walk. After Matt Sanders advanced the runners with a sacrifice bunt, Jason Stolz hit a grounder to second-baseman Jason Stidham that brought home Parker. The Seminole’s throw to first was errant, allowing Schaus to score from second base as well.

Holt cut Clemson’s lead in half in the third inning when he led off with a home run to left field.

In the fourth inning, Mike McGee drew a one-out walk and scored on D’Vontrey Richardson’s double to right-center. Two batters later, Holt grounded a two-out single up the middle to score Richardson, giving the Seminoles a 3-2 lead.

Clemson evened the score in the fifth inning. Addison Johnson laced a one-out double down the right-field line and advanced to third on Richardson’s error on the play. Brad Miller then grounded out to second to score Johnson.

The Tigers regained the lead in the seventh inning with some help from the Florida State defense. Johnson was hit-by-pitch to lead off and advanced to second when Mike Freeman’s flyball to deep left field was dropped by McGee. After both runners moved up on a passed ball, Johnson scored on Paulsen’s groundout to first.

Clemson doubled its lead in the top of the eighth inning. Sanders led off with a walk and went to second on Stolz’s sacrifice bunt. John Nester struck out for out #2, but Sanders moved to third on a wild pitch on the play. Then with two outs, Johnson laid down a bunt single to score Sanders. The Tigers were 0-for-8 in the game and 0-for-22 in the series with runners in scoring position prior to Johnson’s single.

However, the Seminoles used a clutch two-out hit to tie the score in the bottom of the eighth inning. Ohmed Danesh hit a one-out single through the right side. Two batters later with two outs, Holt blasted a two-run homer to left, his second long ball of the game and third of the season.

In the ninth inning, Stuart Tapley led off with a towering drive down the left-field line that was just foul. Tapley later struck out and Stidham flied out. Stephen Cardullo then hit a two-out single up the middle and went to second on Mike Meschke’s walk. After Vaughn entered the game on the mound for the Tigers, he struck out McGee looking to send the game into extra innings.

In the top of the 10th inning, Schaus led off with a double off the fence in right field and advanced to third on Sanders’ second sacrifice bunt of the game. However, Stolz and Nester both popped up in the infield to end the Tigers’ threat.

Like the Tigers, the Seminoles led off their half of the 10th inning with a double to right field off the bat of Danesh. He then moved to third on Rafael Lopez’s sacrifice bunt. The Tigers elected to pitch to Holt, and the move paid dividends, as the sophomore grounded a ball to Miller. The Clemson shortstop threw home in time to retire Danesh at the plate for out #2. After Holt stole second base, Tommy Oravetz flied out to left to end the inning.

The Tigers broke through to take the lead in the top of the 11th inning. Miller drew a one-out walk and went to third on Freeman’s single through the right side. Paulsen then lofted a sacrifice fly to left to score Miller. Parker extended Clemson’s lead from one to three runs when he belted a towering two-run homer to left field, his third long ball of the season.

In the bottom of the 11th inning, Tapley led off with a perfectly-placed infield single off the end of his bat. Stidham followed with a walk and Cardullo flied out to left for out #1. Meschke struck out looking for out #2 and McGee lined a single down the left-field line to score Tapley. Danesh then blooped a single to left that plated Stidham, cutting Clemson’s lead to 8-7. The Tigers brought Harman in the game, then Danesh advanced to second base without a throw. But Harman induced Lopez into a 4-3 groundout to end the game.

Freeman, Parker, Schaus, and Johnson all had two hits apiece to lead Clemson’s nine-hit attack. The Seminoles, who totaled 12 hits, were led by Holt, who was 3-for-5 with two homers, four RBIs, and two stolen bases. Cardullo added three hits as well.

Clemson and Florida State will play the series-finale at Dick Howser Stadium on Sunday at 1:00 PM. The game will be televised live by Fox Sports Florida.