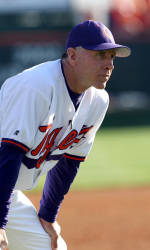 The #17 Tigers made Head Coach Doug Kingsmore Stadium. Wilson Boyd’s two-out, two-run single in the seventh inning capped Clemson’s comeback from a 7-2 deficit early in the game. The Tigers scored the game’s last seven runs to improve to 6-2 on the season, while the Terriers fell to 6-2.

Every Tiger starter had a hit, as Clemson totaled 14 in all. Wilson Boyd’s added two RBIs. Doug Hogan extended his hitting streak to 23 games, the sixth-longest streak in school history, with a single in the third inning as well. Three Terriers had two hits apiece to lead their 11-hit attack.

Sophomore lefthander Matt Zoltak (1-0) pitched 2.0 scoreless innings of relief, walking none and striking out three to earn the win. Matt Vaughn pitched a perfect ninth inning to notch his third save of the year. Wofford reliever Scott Summers (2-1) took the loss after allowing two runs on two hits in 1.0 inning pitched.

The Tigers scratched one run in the second inning. Schaus led off with a single up the middle and moved to second on a wild pitch. J.D. Burgess and Chris Epps drew back-to-back walks to load the bases. Widmann then plated Schaus with a sacrifice fly.

The Terriers took the lead in the top of third inning. Jake Williams led off with an infield single. Sterling Dye doubled to right, scoring Williams. Michael Gilmartin then singled to left field to plate Dye and put Wofford ahead 2-1.

Clemson tied the score in the bottom of the third inning, as Schaus laced a single through the right side to score Ben Paulsen.

Three costly Tiger miscues in the top of the fourth inning helped the Terriers score five runs and take a 7-2 lead. After the leadoff batter was retired, Emre Caglayan and Williams walked. Dye followed with a potential inning-ending double play grounder, but J.D. Burgess could not come up with the one-hopper. The ball went into left-center as Widmann collected the ball. Widmann’s throw to third base was errant and went out of play. All three Terriers scored on the wild play. They were the first runs given up by the Tigers in the fourth inning this season.

Back-to-back doubles by Gilmartin and Shane Kirkley plated another run, then a fielding error by Widmann with two outs allowed Kirkley to score the fifth run of the frame.

But the Tigers responded with five runs of their own in the bottom of the fourth inning to tie the score. Epps led off with a walk and Matt Sanders followed with a double to left, his first hit as a Tiger. Widmann singled up the middle, scoring both Epps and Sanders, to bring the Tigers within three runs.

Widmann, who reached second on the throw, then stole third. Hogan drew a walk and stole second, then Paulsen hit a grounder to first. Mo Seay elected to try to retire Widmann at the plate, but the throw was offline, allowing Widmann to slide in safe. Two batters later with two outs, Schaus tied the score with a triple to right that scored both Parker and Paulsen.

In the seventh inning, Burgess led off with a single to center and Epps drew a walk, his third of the game. Three batters later with two outs, Boyd singled to right to score both Burgess and Epps and give the Tigers a 9-7 lead.

The Tigers will be back in action this weekend at Wake Forest in the ACC opener for both teams. Game times are 2:30 on Friday, 2:30 on Saturday, and 1:00 on Sunday.