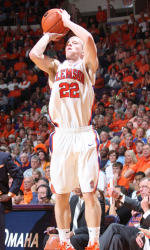 After losing 13 consecutive games to Maryland between 1998-2004, Clemson has won five of the last seven games against the Terps.

Clemson has a 20-4 record, its best 24-game start since 1986-87 when Clemson was 22-2 behind start center Horace Grant. This year’s Clemson roster includes his nephew, Jerai Grant.

Entering last Sunday’s game with Virginia Clemson had been 15-0 when winning the rebound margin and 19-1 when winning points off turnovers. Clemson won both stats against Virginia, but lost the game.

Clemson is 25-4 over the last three years when Trevor Booker scores at least 15 points, but the Tigers lost at Virginia 85-81 in overtime with Booker scoring 16 points last Sunday.

Terrence Oglesby made six three-point goals in the win at Boston College, then came back with five in the loss at Virginia.

It is the first time in his Clemson career that he has had back to back games with at least five three-point goals. He has made 17 of his last 37 three-point shots, a 46 percent accuracy.

Over the last three games Raymond Sykes is averaging 10.3 points and 8.7 rebounds. He has made 14 of 24 shots from the field.

Clemson has five ACC wins by double digits this season.

Clemson has a 10-1 record in home games on February 17, the date of Tuesday’s home game with Maryland.

K.C. Rivers has scored in double figures in five straight games and has averaged 16.4 points per game during this time. He has had at least six rebounds in 10 of the last 11 games.

K.C. Rivers needs two steals to become the third player in Clemson history with 200 steals. He needs 24 points to reach 1600 for his career.

Tuesday will be Oliver Purnell’s 100th game against ACC competition as Clemson coach.