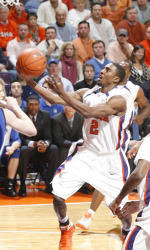 Quick Facts  Clemson will be looking for its fourth ACC road win of the year on Sunday, and a fourth road win would clinch Clemson’s fourth break even or better ACC road season in history. The last time Clemson had four ACC road wins in a year was 1996-97 and it got the fourth win at Georgia Tech.

 Clemson has a 21-4 record, its best 25-game record since 1986-87 when Clemson was 23-2 behind starting center Horace Grant. This year’s Clemson roster includes his nephew, Jerai Grant.

 Trevor Booker got his eighth double-double of the year in the win over Maryland when he had 11 points and 14 rebounds. Clemson is 8-0 this year when he gets a double-double.

 Point guard Demontez Stitt had 15 points in the win over Maryland, his highest total since he had 18 in the win at Illinois on December 2. Stitt has now scored in double figures in four straight games and is averaging 12.3 points per game during that time. Since missing 19 consecutive three-point goals attempts, Stitt has made 8 of his last 19, .421.

 Over the last five games, Trevor Booker has averaged 16.8 points and 10 rebounds and shot 39-62 from the field, .630. He has four double doubles in his last seven games.

 K.C. Rivers has scored in double figures in five straight games and has averaged 16.4 points per game during this time. He has had at least six rebounds in 10 of the last 11 games.

 K.C. Rivers needs one steal to become the third player in Clemson history with 200 steals. He needs 10 points to reach 1600 for his career.

 Trevor Booker needs one block to become the fifth player in Clemson history with 200 blocks.

 A victory at Georgia Tech would give Oliver Purnell 14 ACC road wins in his Clemson career, tying the school record held by Bill Foster, Cliff Ellis and Bobby Roberts.

 Clemson is looking for its first sweep of Georgia Tech since 2005-06 and just its second in the last 12 years.