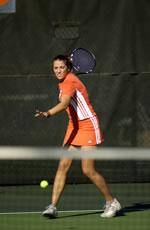 CLEMSON, SC – The 11th-ranked Clemson women’s tennis team will travel to Mobile, AL on Sunday to face #36 South Alabama. The match between the Tigers and the Jaguars will be held at the Bruce David Lubel Memorial Courts and is scheduled to begin at 11:00 a.m.

The Tigers are 5-1 so far this season, most recently defeating Iowa (6-1) and falling to sixth-ranked Vanderbilt (6-1) in Nashville. The team is ranked 11th according to the Intercollegiate Tennis Association poll released on Feb. 24, which is the highest ranking for a Tiger tennis team since the 1994 season when the team was ranked ninth nationally.

South Alabama, currently ranked 36th by the ITA, is 5-3 on the season. The Jaguars defeated Florida International last weekend by a score of 4-3.

The series between Clemson and South Alabama is tied at four victories apiece. The two teams met twice last season with the Jaguars winning the first match by a score of 4-3 in Mobile. The Tigers avenged the loss later in the season with a 6-1 victory over the Jaguars at home.