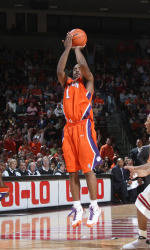 Quick Facts  The Tigers moved up to #11 in the ESPN/USA Today coaches’ poll and #12 by AP on January 5. It is Clemson’s highest ranking in either poll since Nov. 16, 1997 when Clemson was ranked fifth in the AP poll and seven in USA Today.

 Clemson defeated Alabama last year in Tuscaloosa by an 87-61 score. It was Clemson’s largest victory margin in an SEC team’s homecourt in history.

 Clemson is coming off a 79-66 win over East Carolina. Clemson had a 17/6 assist/turnover ratio in that game. The six turnovers were the fewest by a Clemson team under Oliver Purnell.

 Jerai Grant is coming off a career high 14 points against East Carolina. That performance included 6-7 free throw shooting and six rebounds in just 18 minutes. He is 31-38 from the field so far this year.

 The Tigers are 14-0 for the second time in the last three seasons. In 2006-07, Clemson was the nation’s last remaining unbeaten team at 17-0. This year, the Tigers are one of only four undefeated teams remaining in Division I.

 Clemson has won 14 consecutive home games. If Clemson defeats Alabama it would give Clemson 15 in a row and the longest home winning streak for the Clemson program since the 1989-90 era.

 Clemson has overcome five deficits of eight or more points to earn victory this season. In fact, the Tigers have come from at least 10 down on three occasions,. Against Miami, the Tigers rallied from 12 down and versus South Carolina, Clemson overcame an early 11-point disadvantage.

 Clemson has 17 regular season games remaining and all 17 will be on live television.