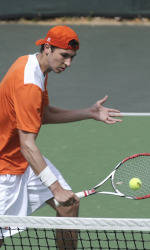 With the win, Virginia improves to 32-1 overall and 11-0 in the ACC. Clemson falls to 17-8 overall and 3-7 in league play. Virginia is ranked number one in the latest ITA poll while Clemson is ranked 44th.

In doubles play, Derek DiFazio and Gera Boryachinskiy of Clemson upset the #6 ranked doubles team of Michael Shabaz and Drew Courtney at number one doubles 8-5. However, the Cavaliers won at number two doubles and clinched the doubles point when Jarmere Jenkins and Lee Singer defeated Clemson’s Rok Bizjak and Moritz Dettinger 9-8 at number three doubles.

“We had opportunities to win the doubles point but were unable to take advantage of them,” said Clemson Head Coach Chuck McCuen. “Not getting the prize carried over to the singles and I could see a let down. We eventually started to fight back. I give all the credit to Virginia. They’re not ranked number one in the country for nothing. They are very impressive in their tenacity, their persistence, and their overall talent. When we started to come back in the matches they would shut down the momentum and that is what championship teams do. They are a very well coached team.

“We must now prepare for the ACC Tournament and work hard because it will be a short week.”

Clemson will participate in the ACC Championships in Cary, NC on April 22-25. The pairings for the tournament will be announced on Monday.